A little promotion for a show and an artist which are worth it !

Last Saturday, 7 May 2011, Minna and I went to the wandering show “Libération à Blois“, written, directed and played by Madeline Fouquet. 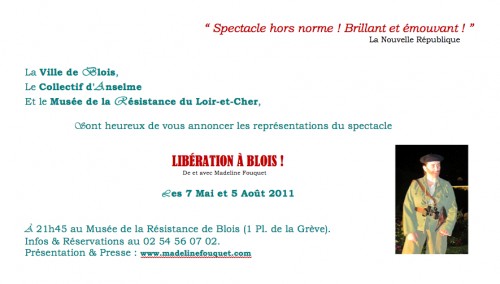 The point of departure was at the musée de la résistance of Blois, 1 place de la grève, at 21h45. Everything started by a screening of an archives film in black and white to show us the state of the town of Blois at the end of WW2. Once the images of Blois wounded by the war put into our heads the trip could start.

Our guide, the curator of the museum, introduced us to important places of the resistance, accompanied by 3 armed resistance fighters, 1 to lead the way and the other 2 to bring up the rear, in order to protect the group. The visit is interrupted with halts where our guide revive the places full of history.

Little by little we leave century XXI until we feel completely in the heart of WW2, especially from the moment we meet Gabriel, a young 18 years old resistance fighter. Interrupting our guide in some places, Gabriel appears to tell us what it’s like to be 18 years old and to be a resistance fighter but we also meet his fiancée Églantine, who shares with us her point of view as a woman. This two characters are admirably played by Madeline Fouquet. From small details of life to gunfights with Nazis by passing by the difficulties of loving during wartime, she manages with an incredible accuracy to share with us their everyday life.

This night when passing by the crossroads of the resistance, the police made an intervention and confiscated the weapons of our resistance fighters. It took us back to reality but not straight away as some of us wondered if it was part of the show. Besides, Minna asked me : “Daddy is it for real or not ?”.

But everything ended well, shortly after midnight, in the magnificent diocese gardens. We have liberated Blois by singing !

This “show”, combination of a guided visit of the town of Bois on the theme of the liberation and a theatrical reconstruction with anecdotes and historical events that knock together, is a real delight and a great performance. Physically trying, because between two appearances, Madeline Fouquet and her associate Claudie Ollivier don’t stop trudging in the steep streets of Blois without anyone noticing it.

For those who missed this event, note that there is another performance on Friday 5 August. I advise you to wear walking shoes and take a torch with you if possible and those who says “Hmmm, WW2 is not an interesting subject to me !”, I would tell you that Minna and I, we feel that way but yet we had a magical time. Besides, don’t tell this to Madeline or the curator of the museum, but on 5 August we will be there again !